* CLICK TO VIEW ALL AVAILABLE TRAVELING EXHIBITS AND SCHEDULES *

The Lewis Henry Morgan Institute’s “One Second” Exhibit Series explores the stories of crash victims across New York State. These forensic-style exhibits focus on high-risk factors such as: the combination of driving and alcohol and/or drug use, excessive speed, and distractions, such as phone use and texting while driving. In addition, the importance of seat belt use is underscored in cases where a lack of seat belt use greatly increased the severity of a victim’s injuries or contributed to a victim’s death.

“The power lies in the telling of the lives of the victims… the timeline of the crash where you see how a series of easily-made decisions has a terrible result.”
– Dr. Andrew Wolfe, Executive Director

“I am a teacher at Eastridge High School and was a teacher of Henry Rivera.  I chose to view your exhibit privately rather than with students because it was very emotional for me, as a teacher and as a parent.  The exhibit was very well presented, combining just the right mix of information and emotion.  Our students have been bombarded with media messages about drinking and driving and they tend to simply tune them out now… This display, especially the personal items in the glass display cases, caught their attention.  I observed other classes walking through and found most of the students to be engaged and moved.  I want to express my appreciation for your efforts in continuing this campaign.  I truly believe we cannot spread this message too far or too often.”

As you tour and reflect these exhibits, you’ll get to know their stories and legacies. They had everything to live for, but everyday life met a culture of the extreme and in one second, everything changed.

This display detailing the dangers of driving while under the influence of powerful prescription drugs is striking and cautionary.  Large, freestanding, vertical panels contain newspaper articles, timelines, personal statements, and profiles of the drivers and victims.

Three Upstate New York traffic incidents are described, in which drivers who underestimated the effects that prescription drugs would have on their ability to drive safely killed a total of five people.  The three drivers were coincidentally all women in their fifties, not the kind of people you expect to cause murder and mayhem on the roads.

The victims were an 11-year old girl, sitting in the back seat of a van that was rear-ended at a school bus stop, an adult male bicyclist who was run over and dragged up the road, and three women who were struck and killed while standing in the covered front entryway to a church.

“I teach driver education to high school students each summer, and I was aware of the problems that prescription drugs and even over-the-counter drugs can cause for drivers, but this exhibit really drove that point home.”

SEE MORE OF OUR TRAVELING EXHIBITS BELOW 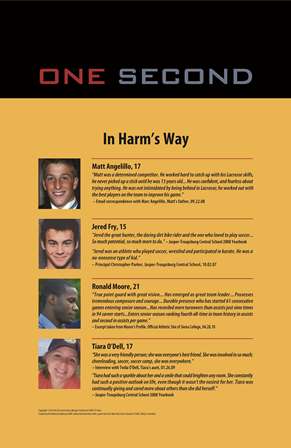 “Athletes Exhibit” portrays high school and college athletes from New York State whose lives were put in danger by someone’s choice to drink and drive. 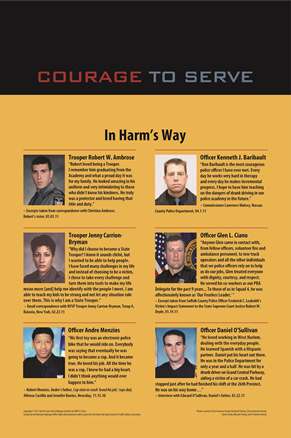 “Courage to Serve Exhibit” portrays different members of Law Enforcement from various jurisdictions in New York State.  Each experienced a similar fate; being struck by a drunk or drug impaired driver.  Each had the courage to serve.  They have everything to live for.  The strength of the Shield met a culture of the extreme … and in an instant, everything changed. 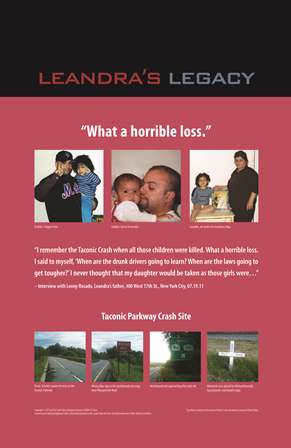 “Leandra”  This exhibit, through words and images, portrays children from New York State whose lives were put in danger by an adult’s choice to drink and drive. It focuses on fateful events in a forensic style. As you tour and reflect, get to know the stories of the Taconic Parkway crash and Henry Hudson Parkway crash. The public’s reaction to these crashes and one father’s crusade changed the law. That law is Leandra Rosado’s legacy for all children in New York State. She, like all innocent victims of alcohol related crashes, had everything to live for, but the immortality of youth met a culture of the extreme and in one second, everything changed.

“Motorcycle Down” describe the grave truth of motorcycles and alcohol not mixing. 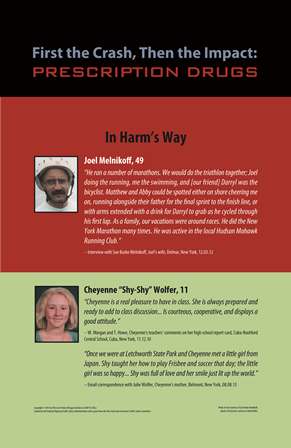 “Prescription Drug Exhibit” portrays people whose lives were put in danger by someone’s choice to mix prescription drugs and driving. 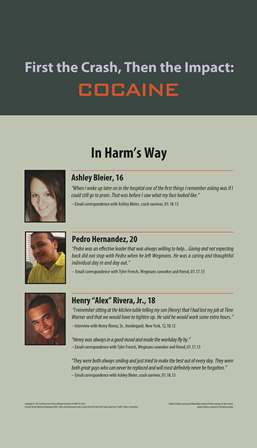 “Illicit Drug Exhibit” portrays people whose lives were put in danger by someone’s choice to mix cocaine with driving.

These exhibits are displayed in various locations, on a rotating schedule, throughout the state.  For more information or to book an exhibit, contact your local STOP-DWI Coordinator (visit the county locator page for contact information).